7 Secrets That Can Make or Break
Your Destination Wedding.

Friday is finally here, ladies! And we don’t want to end this fabulous week without bringing you the full-inspiring wedding festivities of Priya & Jason. Make sure to have your passport ready because we are traveling to the heart of the ancient Mayan region in Playa del Carmen, Mexico. The phenomenal Barceló Maya Grand Resort and its fantastic surroundings were the perfect location for this equally perfect couple joined their lives and shows us all that true love exists. How romantic? On this first installment, we are unveiling the spectacular Indian wedding ceremony celebrated under a spectacular round floral mandap. We can say that the perfect combination between the decor from Latin Asia – Claudia Oyarzabal and the majestic flower arrangements from Jccastillo Weddings created a magical spot for this ceremony. You will love the grand entry from our Maharani on her palki; she looked stunning thanks to the fantastic makeup and hair stylists from KIKA Hair and Makeup. Every single guest enjoyed this moment to the fullest, and we had prepared a complete gallery for you today thanks to the visual skills from one of our favorite photographs Novia Mia Photography. So don’t miss any snap and enjoy this ceremony!

How did you meet your Groom and when did you know he was “the one”?

Jason and Priya first met through a mutual friend at a gathering in Westchester, NY. Jason immediately took notice of Priya and got to hear her talk a little bit about her story amongst friends, which would leave quite an impression on him. They would both see each other a couple more times but then Jason would not hear from Priya for at least 4 years. In the age of social media, leave it to Facebook to bring these two lovebirds back together. Priya saw Jason come up as a recommended contact on Facebook and decided to send him a friend request. Jason was thrilled, of course, and messaged Priya to see how she was doing and they began talking again (however, Priya wasn’t really looking for a boyfriend). They made plans to hangout and before they knew it, they were staying out late talking for hours daily. It did not take long for them to officially become a couple. 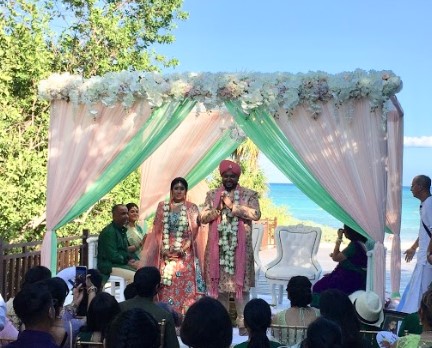 Jason knew very early on that Priya was going to be the woman with whom he was going to spend the rest of his life, if only she were to say yes. In August 2015, the Persauds wanted to head to Mexico for a family vacation. Jason saw this as a perfect opportunity to finally propose. The day everyone was leaving for Mexico, Jason and Priya’s sisters Tara and Divya were at the jewelry store rushing to get the ring ready to take on the trip. Jason gave the ring to Tara to transport to Mexico to avoid any mishaps at the airport that might ruin the surprise. At this time, Jason still had no idea how he was going to do the proposal. While touring the hills of Hualtulco, Jason found the perfect opportunity in front of a waterfall. He told the tour guide that when they were in front of the waterfall, the guide was to take a photo of Jason and Priya. When Jason gave the guide a thumbs up, the guide was instructed to begin recording while Jason got on bended knee and asked his beautiful girlfriend to be his bride. After a ton of tears, and thankfully a huge YES they officially became engaged! 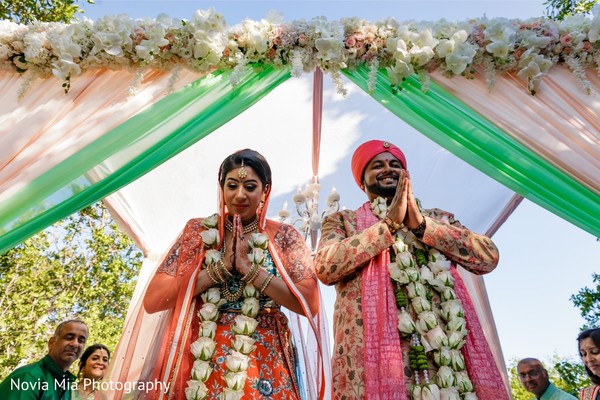 Tell us how you went about planning your wedding, and your overall experience with the Venues, Hair & Makeup, Outfits, Decor Theme, and all of the other important details.

After dismissing the idea of having a backyard wedding, Priya and Jason met with a wedding planner that gave them the idea of having it in Mexico.  They loved this idea as Jason had proposed in Mexico and it seemed to be a be a great way to keep costs down as well as be sentimental.  After some research and travelling to the Cancun area to visit some venues, Jason and Priya finally narrowed it down to the Barcelo Maya Resort after meeting  their wedding coordinators Ivette and Abraham.

Priya and Jason made one more visit to the resort in March where they toured the giant Barcelo Maya complex (five resorts in one location!), planned their wedding events and met with their florist, decorator, makeup artist, and lighting technician.

While finding inexpensive solutions to make their wedding day memorable, Priya and Jason DIY’d their wedding invitations, programs and centerpieces.  They kept in contact with all their wedding vendors in Mexico through email and video chats. Although there were a few issues with communication, everything worked out in the end!

How did you select your bridal lengha or wedding dress? Did you have a favorite color in mind?

Priya had pictured herself in a traditional red bridal lengha since she was a little girl.  Her mother had gotten her a lengha in Malaysia while on vacation – but on a trip to Edison, NJ to look for the bridesmaids lenghas, Priya, her mother and sisters found a stunning, inexpensive lengha at Nazraana they could not pass up!

For her wedding dress, Priya, her family and some friends went shopping in Manhattan.  Priya knew she wanted a hi-lo dress – preferably with a detachable skirt to allow her to move with ease on the dance floor.  While shopping, her cousin Alea realized that a wedding dress was something she could make!  She immediately got to work, creating a pattern.  Priya and Alea made a few trips to the garment district in Manhattan to pick out fabrics and Alea spent countless hours. working tirelessly to cretae the perfect wedding dress for Priya.  The dress was more than Priya could have dreamed of and included a 5 tier tulle skirt with beaded sequin fabric and fully lined with silk, princess line dress made of patterned motif lace and silk and embroidered haute couture straps with 248 Swarovski crystals, 6.4 cts hydrothermal emeralds, and 1.9 ct central Opal.

That’s right you read that correctly – *emeralds* and an *opal*!! 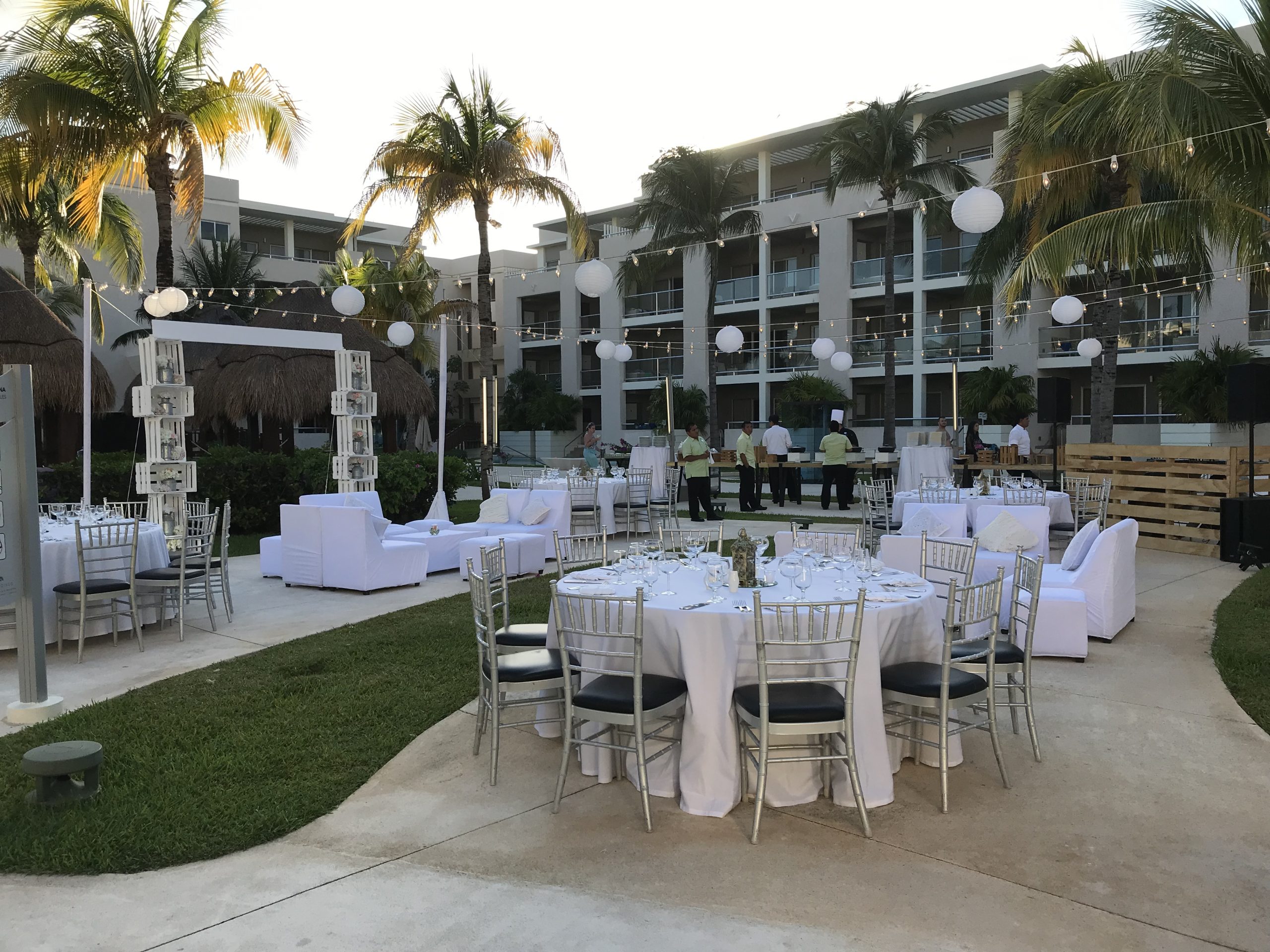 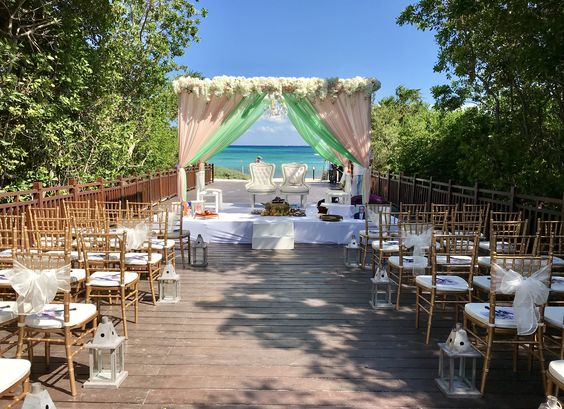 What was the most enjoyable part of the planning process, and why?

The most enjoyable part of the planning process for Priya and Jason was choreographing their first dance.  The couple practiced day in and day out, spending extra time together.  Their first dance incorporated both fast and slow songs, mixing a Broadway musical, electronic dance music and Bollywood.

Alea started Priya’s dress in November and worked on it until hours before the wedding on June 28th.  During this time, Priya and Alea spent more time together than they had since they were kids.  Alea has been Priya’s best friend since birth and the process of making the wedding dress brought them closer than ever and reminded Priya how lucky she was to have Alea as her “partner”.

What did your guests particularly love about your Wedding?

Priya and Jason’s guests loved the exotic setting of a beach in Mexico for a South Asian wedding, as well as some of the over-the-top features that were part of the 3 events – a light-up dance floor, the bride being carried in on a dholi, a tequila donkey, baarat on the beach, and the many choreographed Bollywood dances.

Priya wanted to stay true to her roots and not lose the connection to her Guyanese culture while in Mexico.  It was important to her to have a Guyanese DJ that she flew in from Queens, NY.  Priya also spent hours curating the perfect wedding playlist.  This decision paid off – the guests could not stop raving about the mix of American, soca, chutney and Bollywood music, both modern and classics, that were played!

All of Priya and Jason’s family and friends stayed at the Barcelo Maya Grand Resort in Riviera Maya. When not celebrating the 3 events of the wedding, you could find the wedding guests in the pool drinking and partying!

Was there a really special moment in your wedding that constantly replays in your mind?

The 3 wedding events included a few choreographed dances to songs from Priya’s childhood.  Priya’s best friend of 25 years danced to “Choli Ke Peeche”, her sisters to “Ghoomer” and “Hookah Bar”, and her cousins to “Kay Sara Sara”.  Priya and Jason’s first dance included “Koi Ladki Hai” and her dance with her father was to “Mere Mehboob Mere Sanam”.

Priya spent much of her childhood watching Bollywood music videos, practicing the dances with her friends and cousins in the living room.  Being a part of, and watching her loved ones dance to songs that hold so much significance to her was the most meaningful part of the wedding for her. 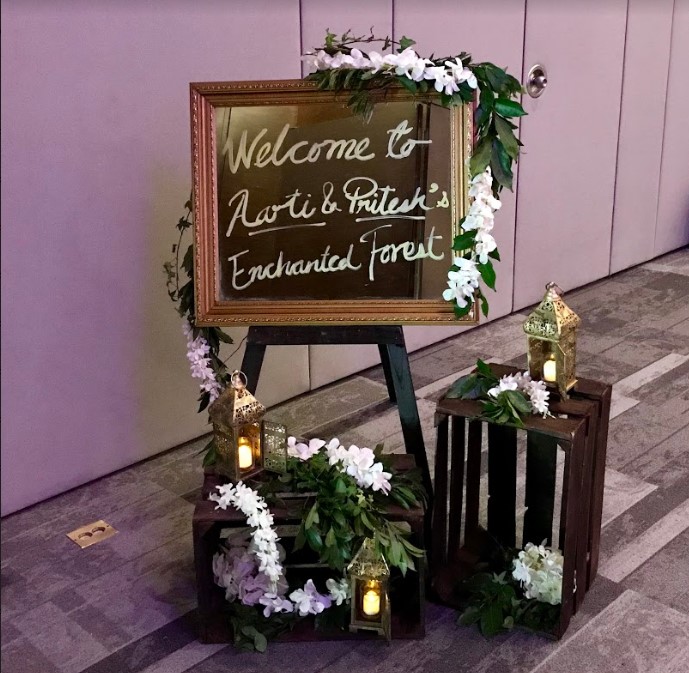 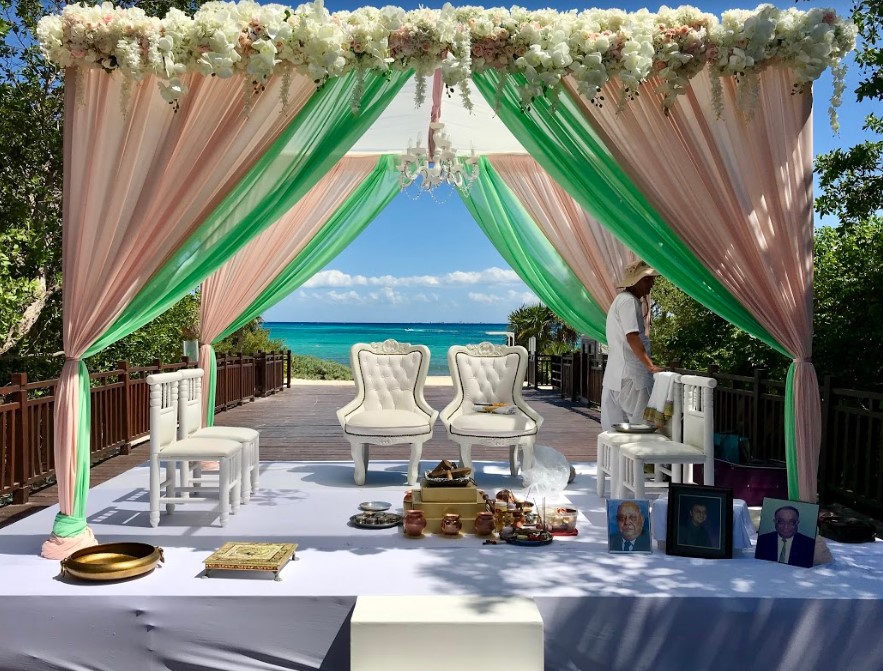 For events other than your ceremony, please tell us as much as you would like about the decor, style, dances, and all the special details.

Do you have any words of wisdom for Brides-To-Be?

Many other brides gave me the same advice – during the wedding, don’t stress about the little details and stay in the moment!  If not for that advice I think I would have been a little more stressed about the events going smoothly.  I would like to pass on those words of wisdom!

When Priya was 17 years old, her life changed forever: she was in a terrible car accident, something that even medical professionals couldn’t predict the outcome of. Although she survived, she had to learn how to walk, eat, and speak again. Her right arm and face would never be the same (thankfully she’s a lefty). Although she was scared, Priya was equally determined to recover and rebuild herself. With the love and faith of her family and friends, and putting one foot in front of the other every day, she was able to progress and recover past her injuries and even went on to graduate with her high school class.

Through her educational journey, Priya had several additional reconstructive surgeries, primarily on her face. It’s been a long road, with some bumps along the way.   Priya is proof that an open mind, full heart, and love of life can take anyone past their obstacles.

It is important for Priya to share her experience strength and hope about her identity as a burn survivor.  When Priya was 17 years old, her life changed forever: she was in a terrible car accident, something that even medical professionals couldn’t predict the outcome of. Although she survived, she had to learn how to walk, eat, and speak again. Her right arm and face would never be the same (thankfully she’s a lefty). Although she was scared, Priya was equally determined to recover and rebuild herself. With the love and faith of her family and friends, and putting one foot in front of the other every day, she was able to progress and recover past her injuries and even went on to graduate with her high school class.

What an inspiring story? Don’t you think? We have more for you, so make sure to check out part two!

Planning an Indian beach destination wedding in Cancun and Riviera Maya, Mexico? You can count on us! Latin Asia One Stop Solution is here to make your wedding experience unique and unforgettable. You don’t have to worry about a thing! We’ll take care of every detail so that you can relax and enjoy your big day.